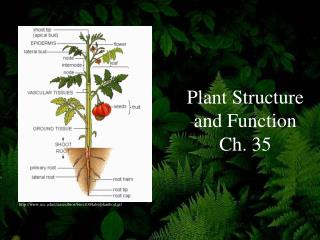 Plant Structure and Function Ch. 35. http://www.uic.edu/classes/bios/bios100/labs/plantbod.gif. Morphology of a Flowering Plant. Root system and shoot system are connected by vascular tissue that is continuous throughout plant. Monocots vs. Dicots.

Plant Form and Function - . chapter 35 structure, growth, and development. the plant body has a hierarchy of organs,

Which plant structure is the site of photosynthesis? - . stem leaves flower roots. leaves!. which organelle helps the