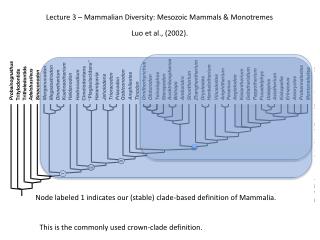 Kingdom Protista - . diversity of protists. eukaryotic organisms that are not members of the kingdoms plantae, animalia,

Exam 4: How do mammals protect themselves from mo’s? - . a. intro 1. the environment is rife with mo’s (bact.,

The Mesozoic Era - . the age of the dinosaurs. the triassic period. this is the first period in the mesozoic era. this is

Lesson #1 - . chapter 11 biodiversity and conservation biology essentials. characterize the scope of biodiversity on

A survey of dinosaur diversity by clade, age, country and year of description. - Michael p. taylor

Diversity Management - . objectives. to provide an understanding of diversity and diversity management principles.

Realizing our commitment to diversity through outreach and research - . counseling and psychological services indiana