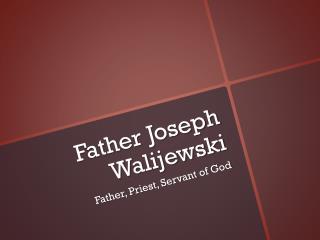 Father Joseph Walijewski. Father, Priest, Servant of God. Born March 15, 1924. He was born in Grand Rapids, Michigan. His family was poor and he began working at the age of 5. . . . We Believe in God: The Father - . god, father and creator the god of our faith general audience of july 24, 1985 god who