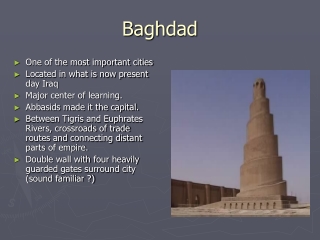 Baghdad. One of the most important cities Located in what is now present day Iraq Major center of learning. Abbasids made it the capital. Between Tigris and Euphrates Rivers, crossroads of trade routes and connecting distant parts of empire. Baghdad - . geography. the geography of baghdad is flat and low-lying. this is mainly because of the fact that it was of

Fall of Baghdad and Occupation - . fall of baghdad. april 9, 2003 fall of statue of saddam in downtown baghdad – most

Baghdad bikers aim to unite Iraq - Roaring along baghdad s highways, the iraq bikers are doing more than showing off