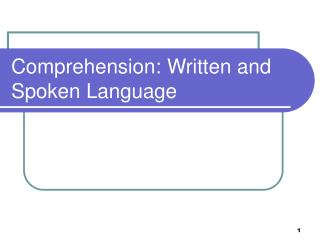 We will distinguish 1 between spoken and written English. - Name. learning objective. activate prior knowledge. we will

What Is Listening Comprehension? What are the Types of Spoken Language? - Speaking english does not necessarily mean

Oral Language Development - . the stages of oral d evelopment in young children. what do we mean when we say “oral