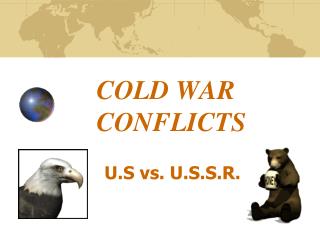 COLD WAR CONFLICTS. U.S vs. U.S.S.R. ORIGINS OF THE COLD WAR. After being Allies during WWII, the U.S. and U.S.S.R. soon viewed each other with increasing suspicion

Conflicts of the Cold War - . the eisenhower edition. the race is on!!!. soviet freak out americans sputnik – worlds 1

Cold War Conflicts and Social Transformations, 1945-1985 - . chapter 30. the division of europe. origins of the cold

The Cold War: Conflicts between East and West - . divide between russia and us??. ideology: democracy communism. venn