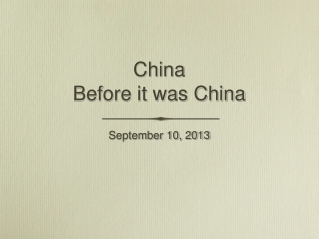 China Before it was China. September 10, 2013. Review. How do we define “ Asia ” ? How has geography influenced Asian history? Which religion spread across most of Asia? How much linguistic diversity is there in Asia?. Homo Sapiens Emerges. CHINA BEFORE THE REVOLUTION - . chinese revolution 1911 to 1949 triggered by disastrous encounters with the west opium