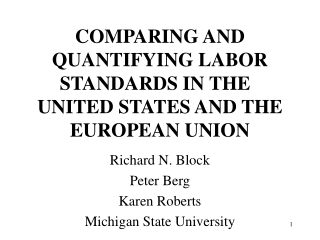 COMPARING AND QUANTIFYING LABOR STANDARDS IN THE   UNITED STATES AND THE EUROPEAN UNION. Richard N. Block Peter Berg Karen Roberts Michigan State University. Labor Standards at the EU Level and US National Level. US and EU are the largest economies in the world About US$/ € 10 Trillion

How can ETSI help? - Harmonised standards and spectrum regulations. how can etsi help?. the regulatory environment in the

Competing Blocs - . the breakup of europe’s empires and the demise of european world leadership led to the division of

Protecting Public and Planet: Environmental and Health Regulation in the United States and the European Union

THE EUROPEAN UNION - . lesson 3 how does cultural diversity impact political identity?. symbols of the european union.

Ch. 7 America Enters the World Stage - . section 1: the lure of imperialism what is imperialism and why does america