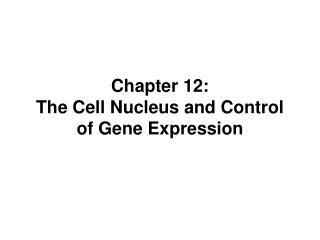 Chapter 12: The Cell Nucleus and Control of Gene Expression Chapter 12: The Cell Nucleus and Control of Gene Expression. The Cell Nucleus…. Every somatic cell contains the same genetic information regardless of whether it is expressed the same way. Just as in a building under construction, all workers have access to the complete set of blueprints.

Chapter 12: The Cell Nucleus and Control of Gene Expression

Chapter 12 - . dna and rna. 12-1 dna. griffith and transformation was trying to discover why certain bacteria made people

CP BIO : Chapter 7 Cell Structure and Function - . the cell is the basic unit of life. 1. discovery of the cell. robert

The “Central Dogma” Overview Of DNA How does DNA control the cell? - . transcription. translation. dna. mrna.

Chapter 12 Gene Regulation in Prokaryotes - . gene regulation is necessary?. by switching genes off when they are not

CHAPTER 12: - . dna and rna. review. what organelle is known as the “control center” of the cell? what structures are

Chapter 12-3: RNA and Protein Synthesis - . what is a gene?. a gene is a set of dna instructions that control the

Chapter 17 The Cell Cycle - . an overview of the cell cycle. 1. the eucaryotic cell cycle is divided into four phases 2.

Chapter 17: From Gene to Protein - . figure 17.1 a ribosome, part of the protein synthesis machinery. experiment.

Chapter 17: From Gene to Protein - . chapter 16 answered the question “what is the genetic material?” chapter 17

Heredity and Gene Expression - . genetics – the study of heredity. lesson objectives. at the end of this topic you

Gene Expression - . cell differentiation. cell types are different because genes are expressed differently in them.

Chapter 12: The Cell Cycle - . important point:. if you are having trouble understanding lecture material: try reading