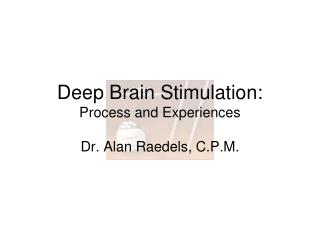 Deep Brain Stimulation: Process and Experiences. Dr. Alan Raedels, C.P.M. What is Parkinson’s Disease?. The brain loses the ability to produce dopamine, a chemical that controls muscle activity. The four primary symptoms are tremor or trembling in hands, arms, legs, jaw, and face; Adolescent Brain Development - . i will send you this presentation. jburkmd@roadrunner.com you will see this slide again

Brain Injury Basics for Families - . no brain injury is too mild to ignore, or too severe to lose hope. what is brain