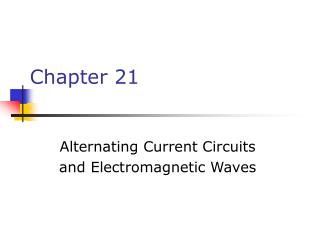 Chapter 21. Alternating Current Circuits and Electromagnetic Waves. AC Circuit. An AC circuit consists of a combination of circuit elements and an AC generator or source The output of an AC generator is sinusoidal and varies with time according to the following equation