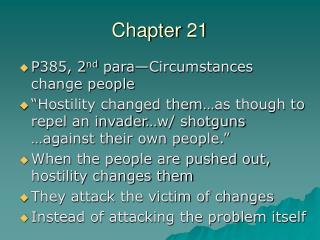 P385, 2 nd paraâ€”Circumstances change people â€œHostility changed themâ€¦as though to repel an invaderâ€¦w/ shotguns â€¦against their own people.â€ When the people are pushed out, hostility changes them They attack the victim of changes Instead of attacking the problem itself. Chapter 21.