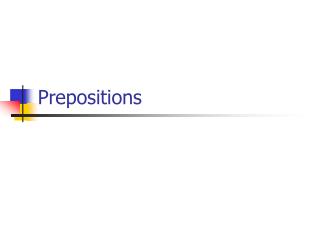 Prepositions. What are prepositions?. What do they look like? Short words (e.g. at, for, in, to ) Longer words and short phrases (e.g. despite, except, according to, out of, in terms of, in the event of ) Participles (e.g. assuming, concerning, given, granted, regarding ) Prepositions, Conjunctions, and Interjections - . unit 6. a preposition usually indicates the temporal, spatial or

PREPOSITIONS - . definition :- preposition is a word, which is used before a noun, a noun phrase or a pronoun ,