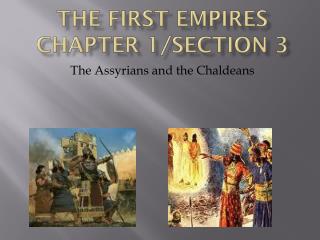 The First Empires Chapter 1/Section 3. The Assyrians and the Chaldeans. I. The Assyrians. The Assyrian Empire arose about 1,000 years after the rule of Hammurabi. Assyria was in northern Mesopotamia near the Tigris River. Muslim Empires - . mr. white’s world history. objectives. after we have studied this section, we should be able to: