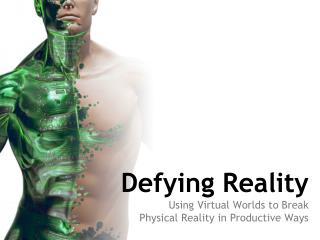 Defying Reality Using Virtual Worlds to Break Physical Reality in Productive Ways. Instead of just replicating physical reality, we should identify and leverage unique levers available to us in virtual worlds to create new forms of work and social interactions.

How to get unstuck, moving and productive - We all get stuck, it could be sales, relationships, money, motivation, or

CAUTION SOME VIEWERS MAY FIND FACING REALITY UPSETTING! - . it’s the sequel to “did you know?”. are you aware….

THE POSSIBILITY OF A DEMENTIA-FREE FUTURE: FANTASY OR REALITY? - . 3. 2. 1. developing a mind…. newborn 3months

Chapter 4 Sensation and Reality - . psychophysics. study of relationship between physical stimuli and sensations they

Lifestyles in the Game World: the virtual, not virtual at all - . sang-min (leo) whang (dept. of psychology, yonsei

Chapter 1 Human Inquiry and Science - . key terms. replication repeating a study and checking to see if the same results