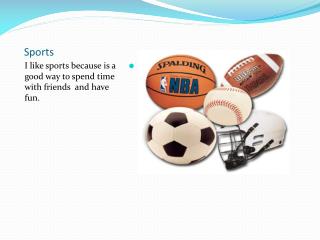 Sports. I like sports because is a good way to spend time with friends and have fun. Sports In America. History of Sports in America. Some sports such as basketball baseball and football arose from games that were brought by settlers that arrived from Europe in the 17 th century.

It’s A Great Day To Be A Bomber! - . the front porch of ithaca college *25 varsity and 4 jv sports *full time coaching

Sports in Society: Issues and Controversies - . chapter 5 sports and children: are organized programs worth the effort?.

The Economics of Professional Sports - Sharp, register and grimes chapter 9 what is the most subsidized industry in all