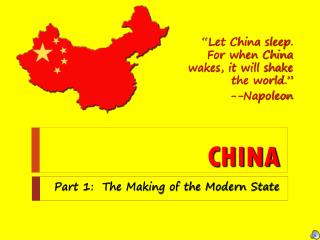 “Let China sleep. For when China wakes, it will shake the world.” --Napoleon. CHINA. Part 1: The Making of the Modern State. Why do we study China?. Unique history greatly shapes political culture One of the few remaining communist nations