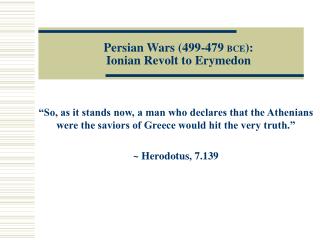 Persian Wars (499-479 BCE ): Ionian Revolt to Erymedon. “So, as it stands now, a man who declares that the Athenians were the saviors of Greece would hit the very truth.” ~ Herodotus, 7.139. Persepolis--Aerial View. Apadana Staircase--Persepolis. Xerxes’ Gate Persepolis. Enjoy the peaceful vacation at the villas of ionian island ! - Visiting greece not only offers you the privilege of

Persian Wars - . outline. where was persia? greeks fed up causes? persia wants to expand. miletus rebels – with help of

Farsi/Persian - . ben shaver. history of farsi/persian. -persian, or farsi emerged in the 6 th century -the initial

Herodotus - . the persian wars, the rise of athens, and the invention of history. key battles-overview. 546 persian

Persepolis: The Veil - . gulsah sarpoglu. the veil. the veil used in this chapter is called the “ burqa ”. a burqa