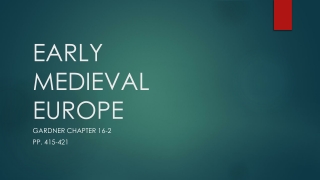 Medieval European - . rhetoric, religion, and war. the crusades in a hot 16 minutes (plus some words from our sponsors).

Chapter 15 – A New Civilization Emerges in Western Europe - . stages of postclassical development between the 6th and

Christianity in Medieval Europe - . world history i. the papacy. the catholic church gained control of territories in

Chapter 2 The Middle Ages and the Renaissance, c.500-1500 - . alister e. mcgrath historical theology: an introduction to

Education During The Middle Ages - . samantha weller keri schuyler john. what were the “middle ages”?. the middle