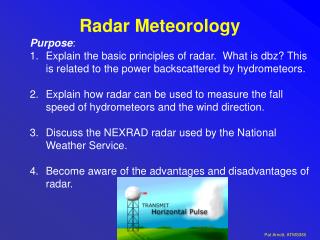 Purpose : Explain the basic principles of radar. What is dbz? This is related to the power backscattered by hydrometeors. Explain how radar can be used to measure the fall speed of hydrometeors and the wind direction. Discuss the NEXRAD radar used by the National Weather Service.

MET 2204 METEOROLOGY - . presentation 2: introduction to meteorology. learning outcomes. at the end of this session,

Weather Radar the WSR-88D - . information taken from the federal meteorological handbook no. 11 part b – doppler radar