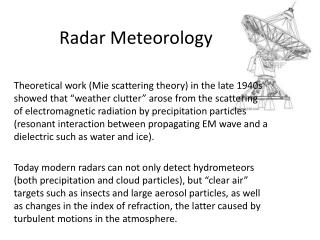 Radar Meteorology. Theoretical work (Mie scattering theory) in the late 1940s showed that “weather clutter” arose from the scattering of electromagnetic radiation by precipitation particles (resonant interaction between propagating EM wave and a dielectric such as water and ice).

MET 2204 METEOROLOGY - . presentation 2: introduction to meteorology. learning outcomes. at the end of this session,

Radar Meteorology - Purpose : explain the basic principles of radar. what is dbz? this is related to the power

Weather Radar the WSR-88D - . information taken from the federal meteorological handbook no. 11 part b – doppler radar