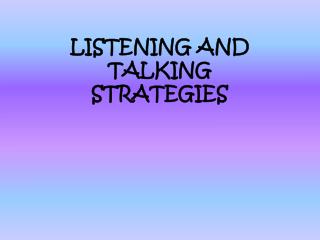 LISTENING AND TALKING STRATEGIES. Pair talk. Easy to organise Ideal for promoting high levels of participation Ideal for quick-fire reflection and review. Pairs to fours. Pupils work together in pairs e.g. friendship, boy-girl Each pair joins up to make four Quick and easy to organise

Teaching Listening - . pre-listening work can consist of a whole range of activities, including: - looking at pictures

Teaching listening - . teaching objectives. by the end of this unit, ss will be able to: know the i mportance of

Learning To Listen, Listening To Learn - . strategies for the interpretive mode in the language classroom. communication

TEACHING LISTENING - . understanding what is heard – how? interpretation of sounds in the context and the circumstances

Accountable Talk - . getting students to talk about math in tutorial. do now. 1. what do you think accountable talk is?

Teaching Listening &amp; Speaking - . introduction:. when we learn any language, there are four skills that we need

10 Strategies to do well in TOEIC Speaking Exams By Thomas Gowing 26/01/12 - . by following some tips, non-native english