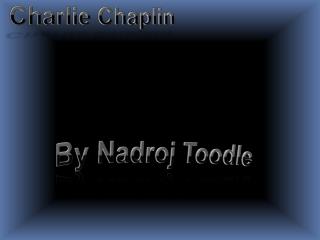 Charlie Chaplin. By Nadroj Toodle. Who is he?. Charlie Chaplin was an English film actor, director, producer, writer, and composer! One of his appearances was in “The Little Tramp” when he wore a gentlemen’s derby, a cane, and a neatly kept mustache with baggy trousers and oversized shoes.

The Jacobite Rebellion of 1745 - . objectives. in this activity you will: learn why the rebellion failed. discuss the

The amazing adventures of Stewie - . charlie pen. stewie griffin . ronnie hipp. were is ronnie and charlie???? . i

1:Language &amp; literature - . roald dahl. question 1. what was &quot;charlie and the chocolate

Charlie and the Chocolate Factory - . activities. next. writing a descriptive paragraph of a room in the chocolate