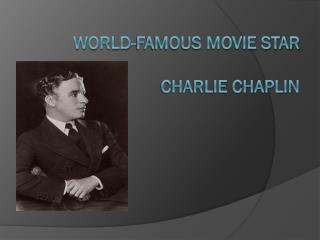 Mr. Weiss - . lyrics to “smile” -words by john turner and geoffrey parsons and music by charlie

主页面 - . unit 2 charlie chaplin. before reading-warm up. &gt;&gt; think-pair-share. discuss : what can we

Reading - . a master of nonverbal humor. a quotation from victor hugo. “laughter is the sun that drives winter from the

Mary Pickford - The nestor company built the first motion picture studio in hollywood in 1911. it is here that the first

A Ride Back In Time - . paulette goddard, getting into her husband's (charlie chaplin) rolls-royce phantom ii . fatty

Film History - . and its humble beginnings…. where did film begin?. usa &amp; france. what famous american led the

Charlie Chaplin - . mrs. niemi. born in london in 1889, chaplin first visited america with a theater company in 1907. in

Charge It Up - . session 2 spring ‘11. calendar. today – charge overview and some background on the actual forces