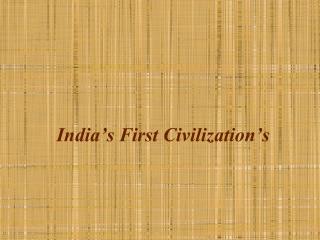 India’s First Civilization’s. The Land of India. India is a subcontinent because it is separated from the rest of Asia by the Himalayas, the highest mountains in the world. The Indian subcontinent contains five nations: India, Pakistan, Bhutan, Bangladesh, and Nepal.

IRAN Archaic Signet of Civilization - . disclaimer this presentation does not follow any political interests, and is