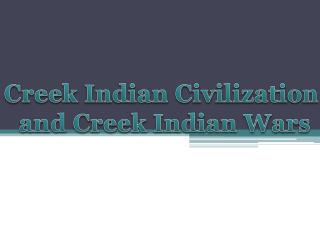 Creek Indians - . where the creeks lived. the creek indians lived south of the etowah river in georgia. they also lived

“Indian Education” by Sherman Alexie - . 1. so, how has school treated you over the past 11 years? have you had good

Andrew Jackson and the Indian Removal Act - . before the presidency. jackson was a general during the war of 1812 war

Chapter 6 Notes Choctaw and Creek removals - . louisiana purchase - made the mississippi river area the “answer to

The Indian in the Cupboard - . by lynne reid banks read by william appleford.

Indian Removal Act of 1830 - . the law gave jackson the ability to grant unsettled land west of the mississippi river to

Indian Wars: The Conquest of the Far West - . do now: what was the previous policy regarding american indians? name one.

Creek and Cherokee - . the creek. fourteen tribes made up the creek confederacy or nation (yamacraw, yamasee, ocmulgee,