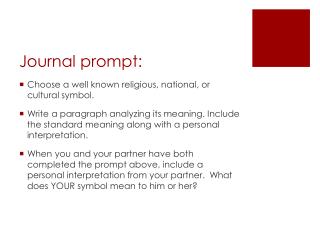 Journal prompt:. Choose a well known religious, national, or cultural symbol. W rite a paragraph analyzing its meaning. Include the standard meaning along with a personal interpretation.

1st Quarter Journal Warm-Ups - . journal 1- [number each entry @ the top] answer this prompt on a separate sheet of paper

1.02 Understand effective communication - . journal prompt #1. how do you communicate? do you like to talk? are you a

The Prompt - . write a thesis and two body paragraphs in which you explore two important aspects of miss maudie’s

Bring on the Writing Prompts! - Understanding what a writing prompt is asking and writing back…. bring on the writing

Writing Prompt - . pick one of the pictures on the table and identify what argument is presented through the use of the Independent Reading Journal Prompts 1. After reading, I wonder… - 2. do the characters seem realistic? why or why not?

Journal Entry #1 - . select one of the prompts to respond to. write today’s date next to the prompt and keep it in your

Journal Prompt - . choose 1 and respond: it bugs me when…. i felt discriminated against when… something i feel i need

Video Clip Journal Prompts - . click on the image to see the video. what lesson can we learn from jason mcelwain’s

Sketchbook Prompts - Keep sketchbooks neat and clean. use front and back of page. must be complete full page sketches.

Journal Response #2 - . unit 2 lesson prompt for the american revolution : - does a government have the right to expect