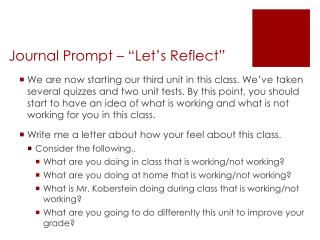 nothing. Journal Prompt – “Let’s Reflect”. We are now starting our third unit in this class. We’ve taken several quizzes and two unit tests. By this point, you should start to have an idea of what is working and what is not working for you in this class.

Chapter Three - . the general journal and the general ledger. performance objectives. record a group of transactions

10 honors - Journal prompts . 10 honors. respond to the following quote in at least 8 sentences. “the soul that is

Chapters 3 and 4: The Mechanics of Financial Accounting - I. double entry accounting ii. the accounting cycle