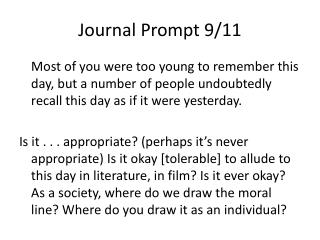 Journal Prompt 9/11. Most of you were too young to remember this day, but a number of people undoubtedly recall this day as if it were yesterday.

Journal Activity Questions - . 1. the term “wave” has more than one meaning in everyday language. list as many

Module 7B for Secondary Teachers - . florida standards for ela &amp; literacy: focus on assessment and data use.

Journal Response #3 - . unit 2.2 lesson prompt for the formation of government : - a little brainstorming … what would

9-6-11 - . write pod in your agenda. place behavior card on corner of desk. place your reading activity assignment on

Mel-Con paragraph - . paragraph 1. parents and schools need to work together in order to prevent the rise of problems

Monday, September 9, 2013 - . goal: today we will be able to practice test taking strategies, organize our assignments

Journal Question - . if you could have anything in the world that you wished for, what would it be? why? now, carefully