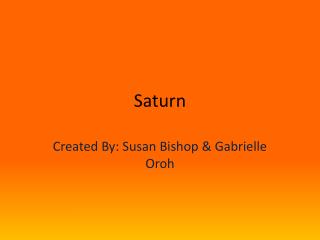 Saturn. Created By: Susan Bishop & Gabrielle Oroh. What are the main differences between Saturn and Earth. Earth is the third planet from the sun and Saturn is the sixth planet. Saturn is the second largest planet in the solar system. Saturn is colder than Earth.