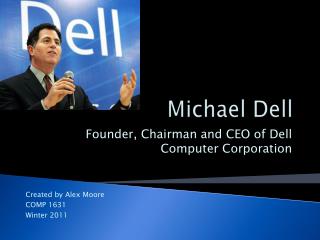 Michael Dell. Founder, Chairman and CEO of Dell Computer Corporation Created by Alex Moore COMP 1631 Winter 2011. A Look at the Life of a Successful Entreprenuer. Born February 23, 1965 in Houston, Texas

How well is Dell positioned for the future? - . services and production of bigger devices used in data centers — e.g Breakthrough - . ujc board of trustees meeting may 2008. breakthrough audience. between the ages of 30-45 high net worth