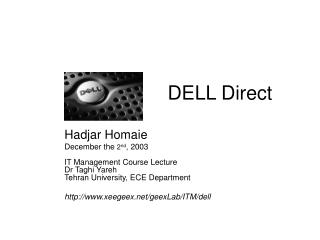 How to Check if Your Dell Laptop Fan is working or Not? - The fan is the most important part of your dell laptop. you may

The Dell Direct Model: What it means for customers(users) - . pros: perceived customization convenience no sales pressure

Direct from Dell - . micheal dell. michael dell. saw an opportunity and grabbed it turned a $1000 venture into a multi

IST 415 - . case one. how dell reengineered its business processes through strategic use of information technology

Direct Manipulation Interfaces - . why buy and use a product?. direct manipulation interfaces. positive acceptance of an