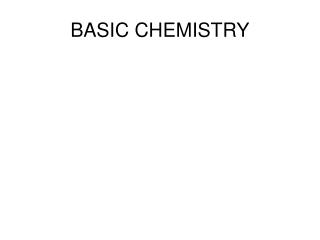 BASIC CHEMISTRY. Definition of Concepts . Matter and Energy. Matter. Is anything that occupies space and has mass The mass of an object, which is equal to the actual amount of matter in the object, remains constant wherever the object is In contrast, weight varies with gravity

Basic Mathematical Skills in Chemistry - . mr. doerksen chemistry 20. chemistry is math!. in chemistry, we have to do a

Chapter 2 – Chemistry of Life - . basic chemistry – atoms to molecules. matter is anything that takes up space and

Chapter 1: Chemistry and You - . explain why a knowledge of chemistry is central to many human endeavors. list and

Chemistry of Life - . chapters 2 and 3. 2.1 atomic structure is the basis for life’s chemistry. it is assumed that this

Chemistry - . chemistry is the science concerned with the composition, structure, and properties of matter. atoms are the

Basic Chemistry - . chemistry:. chemistry is the science of matter. scientists study chemicals, their properties, and

Intro to Biology and Basic Chemistry - . ch. 1. biology is woven into the fabric of society as never before knowledge of