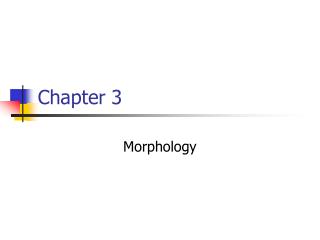 Chapter 3. Morphology. Grammar Safari (xtra credit). Find a morphemically creative word From a naturally occurring source Tell us: What the word means How you know (what each morpheme means) Tree it (we’ll see how to do this later) Example: On next slide… . Safari Example.

ENGLISH PHONETICS AND PHONOLOGY Lesson 3A - . introduction to phonetics and phonology. structure of spoken language (from