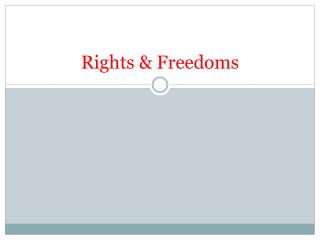 Rights & Freedoms. Rights Liberties and the Pursuit of Happiness. Bill of Rights – the first 10 amendments to the Constitution, they are a listing of the rights of the people. Civil Liberties – protections against the government. In particular the national govt. GOVT 2301 - . the freedom to peacefully assemble and to petition government for a redress of grievances and interests

Welcome to KNOW YOUR RIGHTS: Legal Rights of People with Criminal Conviction Histories - To hear this webinar, you must

Internet-Induced Constraints on Freedoms: The Implications for Innovation Agenda - Internet-induced constraints on