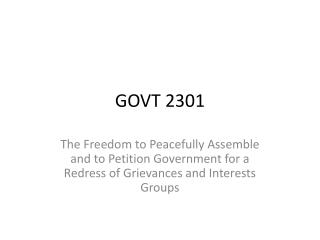 GOVT 2301. The Freedom to Peacefully Assemble and to Petition Government for a Redress of Grievances and Interests Groups. This section covers the last participatory freedoms established in the First Amendment and the key consequences of those freedoms. GOVT 2301 - . civil liberties and the bill of rights. the final constitutional principle we will discuss is individual

GOVT 2301 - This week we come to terms with political parties, their design, evolution and impact on government.. last

GOVT 2301 - In the previous set of slides we looked at republicanism, the first of several principles embedded in the

Philosophy 2301 - . class 4. last class. introduced three areas of philosophy of science, dealing with: the problem of

Economics 2301 - . lecture 16 derivatives and differentials. differentiability. a function is d ifferentiable over a

Economics 2301 - . matrices lecture 13. determinant. a) let us stipulate that the determinant of a (1x1) matrix is the

Economics 2301 - Lecture 11 matrix algebra. economics 2301. acknowledgement. much of the material on these slides was

Economics 2301 - . lecture 17 differential. average and marginal functions. the average function rises as long as the