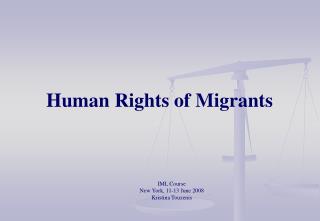 Human Rights of Migrants. IML Course New York, 11-13 June 2008 Kristina Touzenis. What are Human Rights? What/who do they protect against? Who has obligations? Who can enforce? Who implement?. SHORT History. French/American Revolution – changes is social order SECURITY WITHIN THE FRAMEWORK OF THE HUMAN RIGHTS OF MIGRANTS - . the guiding principle of migration policy. every

Deportation of HIV positive migrants Impact on health and human rights - . a chinese medical worker hands out leaflets on

Gay man defends rights of LGBT migrants - On business standard. many central american migrants making their way to the

Human Rights - . a brief introduction. what are human rights. they are a set of principles agreed by the members of the