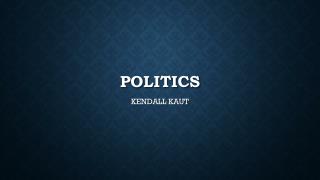 POLITICS. KENDALL KAUT. Why we Need to understand the DA. Links to nearly everything Key reason most affirmatives do not occur Easy net benefit to many CP’s Great impacts and can turn case Important to be able to answer . 1nc. Uniqueness