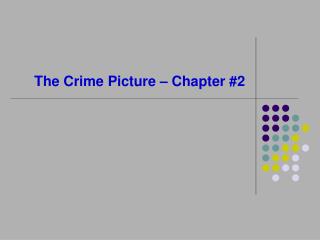 Crime and Criminal Justice - Chapter 1. crime and criminal justice. crime is not a recent phenomenon. crime has evolved

Globalisation and crime in contemporary society - . green crime crime against the enviroment. who……. what…….

Chapter 16 - . putting it all together, explaining crime trends. a quick review. we can place the methods of crime

Chapter Two: - . the nature and extent of crime. chapter objectives. be familiar with the various forms of crime data

CHAPTER - . 2. the crime picture. the value of data. data are valuable and can be used to: shape public policy analyze

Chapter 11 - . defense. defenses . protection from something, something that protects, justification no crime committed

Chapter 3 The Crime Scene - . objectives. the steps to take when processing a crime scene. that type of evidence