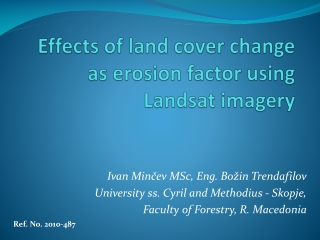 Effects of Urbanization and Land Cover Change on Streamflow in Maine - 2. . presentation overview.

Changes and Feedbacks of Land-use and Land-cover under Global Change - Outline. 1. introduction of land-use and

The Process of Change - . erosion and its effects. http://www.geo-images.com/atlas. by 6th grade student. ms. krieter’s

Challenges for land use and land cover data in integrated global change assessments - . peter verburg. use of land use