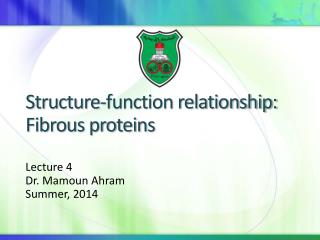 Intrinsically Disordered Proteins: from lack of structure to pleiotropy of functions - . lilia iakoucheva university of

The Structure and Function of Large Biological Molecules - . chapter 5. the molecules of life. living things made up of 4

PROTEIN STRUCTURES - . to see some of these images in 3d you will need a blue or cyan filter on your left eye and a red