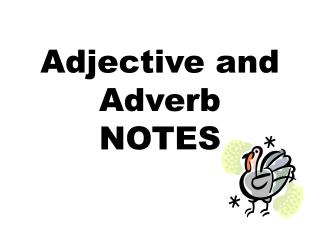 Adjective and Adverb NOTES. Adjectives. An adjective is a word that modifies, or describes, a noun or pronoun They answer the questions: What kind? Which one or ones? How many or much?. Articles are Adjectives. Articles: a , an , and the Indefinite Articles: a and an

Word Definition Form ( noun, verb, adjective, adverb) - You and your team will present your answers to the class. every

UWF WRITING LAB RULES OF THUMB FOR ADJECTIVE AND ADVERB USE - . from real good grammar, too by mamie webb hixon.

UWF WRITING LAB RULES OF THUMB FOR ADJECTIVE AND ADVERB USE - . from real good grammar, too by mamie webb hixon. speaker

Adverb Notes - . grade 7. a word that modifies ( adds information to) a verb , a djective , or other adverb. . adverb

PART of SPEECH NOUN, VERB, ADJECTIVE or ADVERB ??? - . i am boring or i am bored ???? i belief in islam because islam is

Adjective vs Adverb - . the trapped rabbit reacted a. violent when we b. tried to free its foot from the c. old snare,

Adjective &amp; Adverb Clauses - . a review. clause v. phrase. a clause has a subject and a verb independent (main)

Noun Clauses and Review of Adjective and Adverb Clauses - . april 7-11. monday, april 7, 2014. practice prior skills. to

Adverbs—modify verb, adverb, or adjective - . 1. each skater practiced nearby. nearby  practiced where? 2. the fans

Adjective and adverb clauses - . what are they? how do they make my writing more effective? why do i need to know this?.

Notes on Adjective Agreement - . adjective agreement. in french, adjs must agree with what they’re describing (the

Adjective or Adverb? - . lesson 124. adjectives. an adjective is a word that describes a noun. adjectives tell what kind

Adjective and Adverb - . tim, rooney, and rebecca. adjective and adverb use. showing comparison with modifiers. regular

Adjective or Adverb? - . adjective? or adverb?. adjectives answer the following questions: which one? what kind? how