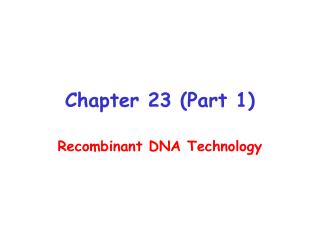 Chapter 23 Facials - . “a positive attitude may not solve all your problems, but it will annoy enough people to make it

Chapter 23 - . the respiratory system. part c. lung collapse. caused by equalization of the intrapleural pressure with

Ch 23 Part 2 - . phylum magnoliophyta. apomixis and parthenocarpy : apomixis - without fusion of gametes but with the