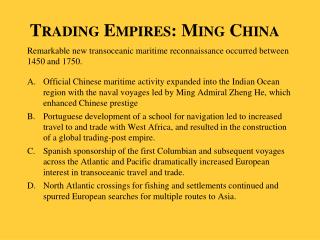 The Ming Dynasty - . by: paige krug and jordan king. dynasty rule. the ming dynasty was one of the longest and most

Asia and Islamic Empires in Transition - . time to pull out those maps. ming and qing empires. here is your reference

Empires in 1500: Ottoman, Mughal, China &amp; Japan - . bell ringer: read the article about the start of the ottoman

Key Terms – Expansion of Chinese Trade - . tai tsu ming dynasty zheng he. the fall of the mongols. chu yuan-chang would

The Mongol and Ming Empires - . focus question  what were the effects of the mongol invasion and the rise of the ming

A Bit on the Yuan Dynasty, But More on the Ming and Qing Dynasties - . world civilizations. the yuan dynasty. mongol

Ming Dynasty (China) - . i will identify and describe the major effects of the influence of the ming dynasty on world