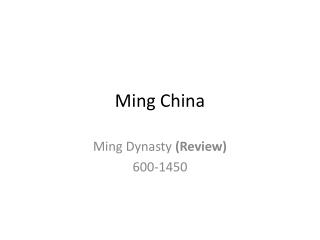 Ming China - . chapter 19. the mongols. hongwu. drives the mongols out of china (1368) thus, creating the ming dynasty in

Ming Dynasty (China) - . i will identify and describe the major effects of the influence of the ming dynasty on world

Qing China Plus Korea, Ming China and Tibet - . january 16, 2014. review. what was the primary written language in korea

Ming Dynasty - . keeping china safe from invaders. emperor yung lo has pushed the mongol forces back and saved china from