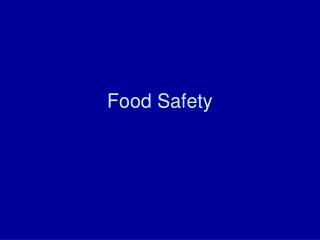 Food Safety. Food additives. Additives: Substances, such as preservatives ( 防腐劑 ), emulsifiers ( 乳化劑 ), antioxidants ( 抗氧化劑 ), and stabilizers ( 穩定劑 ), are often added to a food to do the following:. Enable it to be processed more easily Preserve it longer and reduce spoilage ( 腐壞 ) Food Safety - . does litigation help?. may 6, 2008 university of minnesota. to put things in perspective. microbial

FOOD SAFETY - Cross-contamination: letting micro-organisms from one food get into another. . example 1: cutting meat on a

Food Safety - Why is this a problem?. background: in the united states, contaminated food causes approximately 1,000

Food Safety - . the us has the safest food supply in the world due to a high level of regulation: laws which govern

Food Safety - . amduca has become a drug safety issue.use in animals that can transfer resistance to humans.. pathogens: