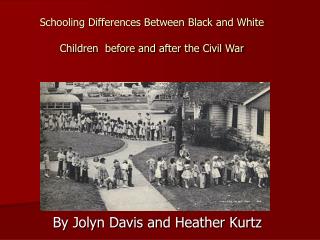 Schooling Differences Between Black and White Children before and after the Civil War. By Jolyn Davis and Heather Kurtz. . Thought Question…. How was schooling different between black children and white wealthy children in the late 1800’s?. The South During Reconstruction - . african-americans were elected to government positions. southern whites r eact to

Schooling as a Signal - . the schooling model we saw in a previous section assumed that education really increases a

A Lesson Before Dying Ernest Gaines - . ernest j. gaines was born into a family of sharecroppers in pointe coupee parish

Charles Chesnutt - . the house behind the cedars. biography. b orn in cleveland in 1858 to “free persons of color”