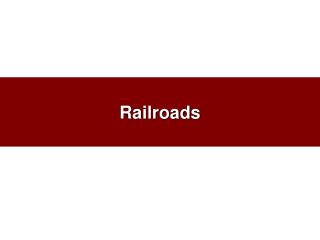 Why Are Railroads Important? - . railroads are necessary for the efficient functioning of a modern economy . no other

Pros and Cons of the Railroads - . railroad industry. the first major business of the u.s. was the railroads. railroads

RAILROADS SPUR INDUSTRY - . why are there time zones??? where did we get this ingenious idea? any guesses? write it on

Cowboys and Railroads - . the cattle industry becomes big business. as the herds of buffalo disappeared, horses and

The age of the railroads - . by adam and mikayla. a national network. in 1856 railroads extended to the mississippi

Railroads Unite America - . the transcontinental railroad. completed in 1869 connected the atlantic coast to the pacific

Railroads Led the Way - . improving the railroads. each r/r built it’s own tracks to its own specs no unified code