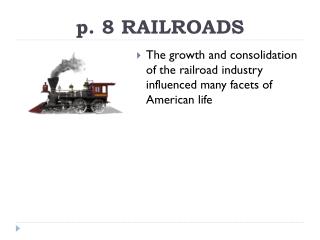 p. 8 RAILROADS. The growth and consolidation of the railroad industry influenced many facets of American life. TRANSCONTINENTAL RAILROAD. Building the transcontinental railroad—stretching from East to West—helped promote settlement on the Plains.

The STB, the Congress, and the Nation’s Railroads - . commissioner francis p. mulvey southwest association of rail

Ch 6, Sec 2 The Age of Railroads - . 1. in order to help bring about western settlement and economic development, the

The Pennsylvania Railroad - . &quot;the standard railroad of the world&quot; . the pennsylvania railroad.

Unit 9 Cotton, Cattle, and Railroads - Historians divide the past into eras so it is easier to identify causes and

The Railroads The first transcontinental railroad - . the american west. the building of the railroads. built in 1860s