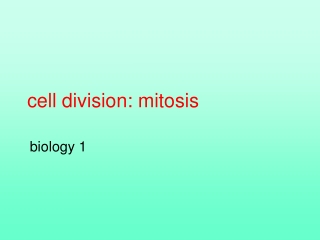 cell division: mitosis. biology 1. Why cells divide and what they have to do to accomplish this Division in prokaryotes Division in eukaryotes Chromosone structure Phases of the cell cycle Cell growth factors Cancerous growths. Why divide?. Ensures persistence of genome Life of a Cell - . the cell cycle and mitosis. mitosis (copy this information on the back of your mitosis cut &amp;

Cell Division - . day i. cell division: mitosis &amp; meiosis. the process by which two cells are formed from one.

5.1 MITOSIS - . izat ezatte binti musa 4 utm. the necessity for the reproduction of new cells organisms. mitosis is the